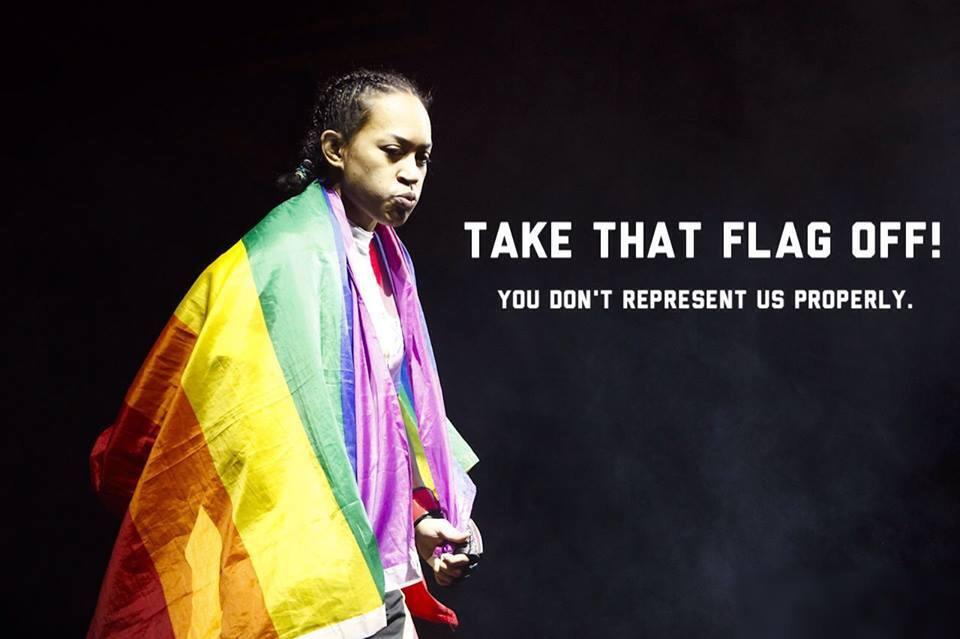 AJ McKenna is a multi-slam winning poet and the Deputy Editor of So So Gay, “the most popular and fastest-growing online LGBT lifestyle magazine in the UK”. She will be performing at a poetry/spoken word event as part of York LGBT History Month 2015. In this guest post, she speaks about the power of poetry (over journalism) in the context of commentary on LGBT issues.

There are two things in my life which I always flinch after saying. One of those things is that I’m a trans woman. This can provoke a variety of responses, running the gamut from the patronising (‘Oh wow! I’d totally never have guessed!’) to the slightly too-interested (‘You know, I find girls like you have their own unique beauty…’) to just outright bigotry and threats of physical violence to – in the majority of cases, to be honest – a shrug of the shoulders and a reply along the lines of ‘Cool. Wanna get a beer?’ Weirdly enough, it’s the second thing I usually flinch after saying which makes me more nervous. Which is that I’m a poet.

Poet. Maybe things are changing, with stuff like the Guardian’s ‘Spoken Word’ promotion (on which you can find me reading ‘Buxom’ [see below], my poem about getting badly-written death threats – a thing which happens when you tell people you’re a trans woman online), and Apples and Snakes, but when I started out admitting to writing poetry was an embarrassing thing to say. There wasn’t any money in it, it wouldn’t make you famous, and who reads poetry books these days anyway?

You can find yourself having days, as a poet, when you wonder if there’s any point to it. And I get those moments too. So, often, I tell people that as well as being a poet I’m a journalist – which I am. I’m Deputy Editor at So So Gay, the UK’s fastest-growing online LGBT lifestyle magazine, and, while journalists are not exactly the most popular people in the country in this post-Leveson climate, journalism at least sounds more like actual work. Journalists stay up late drinking whisky and smoking while banging out copy and ringing people up to shout ‘Why are you lying to me, you bastards?’ at them at three in the morning, while poets mince about in floppy shirts sniffing daffodils and fainting at the sight of their own snot. Both of these things are completely inaccurate stereotypes, but if people must stereotype me I’d rather have the one that sounds cool and involves whisky and swearing.

But every now and again, something happens that reminds you that poetry may, in fact, actually be more powerful than journalism. Such a thing happened to me just recently, and it’s what I want to talk about here, but first, a little background.

One of the things I like about So So Gay is that we have regular sports coverage. We’re not just a stereotypical LGBT magazine – yes, we do cover Eurovision as if it were the Olympics but we also cover the actual Olympics with the same level of dedication. So, whenever there’s an LGBT sports story out there we will get on it.

Such was the case with the recent announcement that Fallon Fox, the world’s first openly transgender Mixed Martial Arts (MMA) fighter (but not the first openly trans athlete – that would be Renee Richards), who also happens to be a lesbian, would be fighting Tamikka Brents, a cisgender lesbian MMA fighter who gave an interview in which she spoke of her desire to be ‘an advocate for the LGBT’ at her next bout. This should have been an awesome thing – two out lesbian women, one cis, one trans, competing in a sport not exactly known for its progressive fanbase – it could have been a defining moment for both the fighters, and the wider LGBT and MMA communities. It could have been brilliant.

But we cannot have nice things in this society, because instead of taking the high road, Brents chose to give an interview full of transphobic dog-whistles, refused to take a stand against transphobia from her fans, and was happy to accept the support of transphobic hate-groups without doing anything to distance herself from them. What could have been an amazing moment was turning into an ugly display of the tension which too often exists between the LGB and T sections of our community. It was turning ugly.

I reported on all this for So So Gay, receiving no response either from Brents or the transphobic groups that had supported her. And then, this Friday, I wrote a poem [see ‘You remind me of Tyson, Tamikka’ below] about the whole business. Various thoughts had been percolating in my head during the whole period I’d been writing about this with my journalistic head on, and as a result I found a way into writing about the case poetically, rather than journalistically. Inevitably, as these things do, it became a poem about more than one bigoted cage-fighter: it took in Stonewall’s Rainbow Laces campaign, gay American footballer Michael Sam’s problems in the NFL, the ongoing, dignity-free second act of Mike Tyson’s career (particularly through the prism of Joyce Carol Oates’ brilliant review of Tyson’s memoir) and a lot of stuff about one of my ongoing themes, the chuckling, saloon bar normalisation of bigotry as ‘banter’ [see ‘You’re F***ing Dead lol j/k’ below] which hurts so many women and LGBT people. And – where weeks of writing about the case journalistically had led to nothing – the poem did cause a reaction.

I woke up this morning to comments on my YouTube Channel accusing me of homophobia, racism and misogyny. To people telling me they hoped I ‘choke’ on my own ‘bile’. To articles on transphobic websites calling me a ‘heterosexual man’ and an ‘infiltrator’. It looked, to all intents and purposes, like a co-ordinated campaign to try and paint me as a racist, misogynist homophobe.

I’ll keep the refutation brief: here’s the poetry film I made for a celebration of the 50th anniversary of Martin Luther King’s ‘I have a dream’ speech, which I chose to write about CeCe McDonald, a trans woman of colour imprisoned for defending herself from a racist, transphobic attack. Here’s the poem I wrote about the EDL [see ’25/5/13′ below] which has led to racist skinheads hurling abuse at me on protests. And here’s the column by black trans poet and activist J Mase III which I had published in So So Gay when other LGBT media outlets refused to run it. As to the charges of lesbophobia and misogyny – that only works if you deny my gender identity as a bisexual trans woman. If I’m a racist, I’m doing a bad job of it; and if I’m a misogynist homophobe, I’d be making myself my first target.

What interests me more about this is the virulence of the response to a poem. It seems as if the transphobes could take any number of articles about Brents’ connections to and tolerance of transphobia, but as soon as I write a poem about it, that becomes too much for them to take.

We shouldn’t, perhaps, find this so surprising: targeting poets is one of the first things tyrants do, and transphobes – who demand the right to control not just peoples’ bathroom access [see ‘The Bathroom Thing’ below], but their existential identity – are a tyrannical bunch (if you want proof of this and you’re a cis woman, try arguing with them and see how long it takes before they call you a man). Tyrants fear poetry more than journalism: that’s why poets like Tal al-Mallouhi, Liu Xiaobo and Osip Mandelstam have all been imprisoned by the dictatorships they wrote about – and while it would be absurd to say that being subjected to online abuse by transphobic bigots with little better to do is comparable to being locked up in the Gulag, the thing to remember about petty tyrants is that they would do the same thing as greater ones if they had the same power. The impulse is the same: shut up. Stop saying that. How dare you say that? How dare you make it resonant and beautiful? How dare you not take me seriously?

The tyrant demands the power to define reality. To write about the tyrant poetically is to write about them at a heightened level of reality, more than just the prosaic day-to-day stuff of journalism, and so to rob them of that power. That’s why those racist skinheads I mentioned earlier were so angry at me when I protested against them; and that’s why the transphobes who’ve defended Tamikka Brents have been angrier about the fact I wrote a poem than about any of my journalism.

Maybe I ought to be less embarrassed about admitting to being a poet. But first, I need to find a floppy shirt to mince about in.